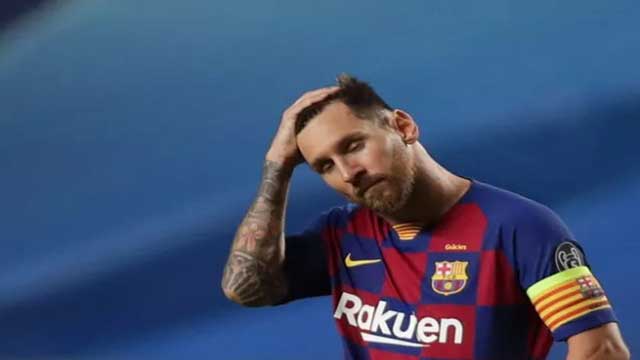 Captain Lionel Messi has told Barcelona he wishes to leave the club immediately, a club source confirmed to Reuters yesterday, deepening the turmoil within the Catalan side less than two weeks after their humiliating 8-2 defeat by Bayern Munich.

According to the Reuters report published early on Wednesday, the club source said Messi, who has spent his entire career at Barca, informed the club about his desire to leave by sending a burofax, a service used in Spain to urgently dispatch a document that requires proof to third parties.

A second source added that the burofax referred to a clause in the last contract the 33-year-old Argentine signed with the club which allowed him to leave for free, a clause that expired on June 10 this year.

The information was first published by Argentine media TyC Sports yesterday and according to their report, Messi wants to execute the clause in his contract that allows him to unilaterally leave the club at the end of each season.

Spanish journalist Alfredo Martinez tweeted that Messi will no longer undergo coronavirus testing this week or train with the team, adding that his decision was final. He further informed that an urgent board meeting has been called.

Another journalist Guillem Balague suggested that club has confirmed that the fax from Messi arrived. The club however insisted that the clause in question has already expired.

Reportedly, Barcelona maintain that this clause that allows him to leave, expires at the end of May 31 each season, and without it being triggered, has automatically renewed for another year. However, Messi's lawyers argue that the season did not finish on 31 May due to the coronavirus pandemic and that Messi therefore retains the option to terminate the contract.

While the club is yet to officially speak regarding the situation, reports say the club believe he is still bound by the €700m buy-out clause. Messi's contract expires next summer, at which point he can leave for free which also means that the club may be forced to deal with potential buyers.

Messi has on more than one occasion revealed his frustration with the club this season. The Argentine joined Barcelona in 2000 at the age of 13 and the current Barcelona president Josep Maria Bartomeu may now go down as the man who oversees the sad, painful departure of the most important player in the club's history.

Fans gathered outside the club's offices are already calling for the board president's resignation.