Milkha Singh: The man who never ran away from his fears 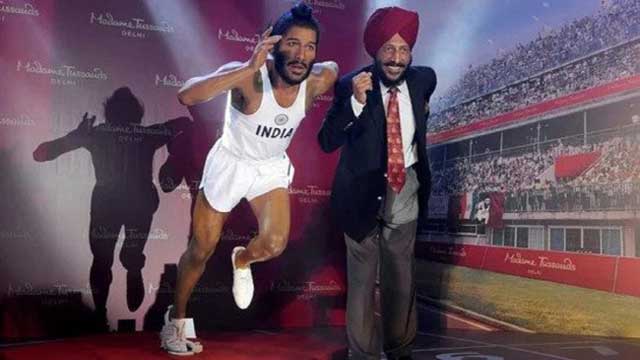 "This man never ran away from his fears, he ran along with them," said Rakeysh Mehra, who directed a Bollywood film, inspired by India's track legend Milkha Singh, in 2013 called "Bhaag Milkha Bhaag" (Run, Milkha, Run).

The track, to him, was like an open book in which Milkha found the "meaning and purpose of life". And what a life he made for himself.

Before his 91-year-old body lost to COVID-19 on Friday after fighting it for a month, Milkha won the kind of battles that not many would have survived, forget about living long enough to tell the world about them.

"Don't worry, I am in good spirits...I am surprised, How could I get this infection?...I hope to get over it soon," Milkha had said in his last interaction with PTI before being hospitalised.

One of independent India's biggest sporting icons was a tormented man but refused to let that come in the way of accomplishments which were unheard of in his era.

He saw his parents being butchered during partition, indulged in petty crimes to survive in refugee camps of Delhi, went to jail for those and failed three attempts at joining the Army.

Who could have thought a man like that would get the sobriquet of 'The Flying Sikh'? But Milkha earned it and earned it with a master-class on how to be bigger and better than one's circumstances.

He "revered" the track like "the sanctum sanctorum in a temple where the deity resided."

To him running was both his God and beloved as he created his own little fairytale out of what what could have easily been a tale of horrors.

To talk of medals, the legendary athlete was a four-time Asian Games gold-medallist and the 1958 Commonwealth Games champion but his greatest performance was a near miss, the fourth place finish in the 400m final of the 1960 Rome Olympics.

His timing at the Italian capital remained the national record for 38 years and he was bestowed the Padma Shri in 1959.

But more than anything else, Milkha was the one who put Indian athletics on the world map by winning the gold in the then 440 yards race of the 1958 British and Commonwealth Games.

He became the first Indian athlete to win an individual gold in a Commonwealth Games, which led to then Prime Minister Jawaharlal Nehru declaring a national holiday on his request.

Milkha put his career record at 77 wins out of 80 races. He also claimed to have bettered the 'Olympics record' of that time in a race in France, but with sketchy records available, it is difficult to confirm just like his actual date of birth which is officially November 20, 1929.

He lost the race of his life in the Rome Olympics, finishing the 400m final in 45.6 seconds, 0.1 second short of the bronze medal mark.

Hard to believe but he had slowed down in a colossal error of judgement as he wanted to preserve himself for the final 150m.

He remained tormented by that miss, one of the only two incidents in his life, which he described as unforgettable -- the other being the killing of his parents in Pakistan.

"The one medal I had yearned for throughout my career had just slipped through my fingers because of one small error of judgement," Milkha wrote in his 160-page autobiography that coincided with the release of a blockbuster biopic on his life 'Bhaag Milkha Bhaag'.

However, his timing at the Italian capital remained a national record for 38 years till Paramjeet Singh broke it in 1998 at a national meet in Kolkata.

Milkha had promised to give a cash prize of Rs 2 lakh to the one who breaks his record, he eventually did not because the flamboyant star believed that Paramjeet's feat would have counted for something only if he had achieved it in a foreign competition.

"Mera record todne wala India mein paida nahi hua (the one who can break my record is not born yet in India)," he had famously said in 1991 and he hung on to that belief even when that record was shattered.

A self-proclaimed village 'bumpkin' from the undivided Punjab's Govindpura, Milkha's run for a better life started as a 15-year-old when he escaped from Pakistan to Delhi after witnessing a bloodbath that claimed his parents during the partition.

His approach to life in the refugee camp was irreverent. He worked as a boot polish boy, a shop cleaner near the old Delhi Railway Station and in between stole goods from trains to make ends meet.

The petty crimes landed Milkha in jail and he was bailed out by sister Ishvar, who sold her jewellery to get him released.

Milkha tried to step up in life by making repeated attempts at joining the army. He got through on his fourth attempt in 1952 and that proved to be the turning point which he so desperately wanted and needed.

He was posted in Secunderabad and ran his first race -- a cross country of five miles -- there when army coach Gurdev Singh promised an extra glass of milk to those who finished inside top-10.

He finished sixth and later got selected for special training in 400m. The rest, as they say, is well-documented history.

He won the selection trial the 1956 Olympics despite that he had been brutally assaulted by his rivals a day before that race.

Milkha disappointed at the Games as he failed to get past the preliminary heats but benefited from the experience and was able to persuade 400m gold winner Charles Jenkins to share his training methods.

In his autobiography, he had claimed that he trained so intensely after that disappointment that he would vomit blood and would fall unconscious on many occasions.

His life and career story is incomplete without the 1960 Indo-Pak sports meet where he outran Pakistani Abdul Khaliq before the Rome Olympics.

Khaliq was considered the fastest man in Asia at that time, having won the 100m gold in 1958 Asian Games. After winning 400m gold in the same Games, Milkha had also beaten Khaliq in the 200m final.

At first, Milkha refused to go to Pakistan as he did not want to return to a country where his parents were butchered but was persuaded by Prime Minister Nehru to face his demons.

He beat Khaliq in the 200m race in Lahore and was christened 'The Flying Sikh' by then Pakistan President General Ayub Khan who congratulated him during the awards ceremony.

Milkha retired from athletics after the 1964 Olympics, two years after winning the gold in 400m and 4x400m relay events at the Asian Games held at the same place.

Before that he had already taken up the job of deputy director of sports in the Punjab government in 1961 on the insistence of then chief minister Parapet Singh Kairon. He quit Indian Army and also shifted his residence to Chandigarh from Delhi.

In 1991, he introduced a compulsory games period in schools and also set up sports wings in schools in the districts to tap talent at the grassroot level.

He got married to Nirmal Kaur, captain of the Indian volleyball team, in 1963. They met for the first time in 1956 in Sri Lanka when they were there for their respective national duties.

The couple was blessed with three daughters and a son, golfer Jeev Milkha Singh.

It was quite stunning that an athlete of Milkha's stature was offered the Arjuna award, instituted in 1961, only in 2001.

He famously turned it down, saying the honour was not of the "stature of the services he rendered to the nation".

In fact, Milkha was a sum total of way more than his several races and medals. He was also much more than that near miss in Rome.

He was India's love affair with the track, the one that this country can never get over.