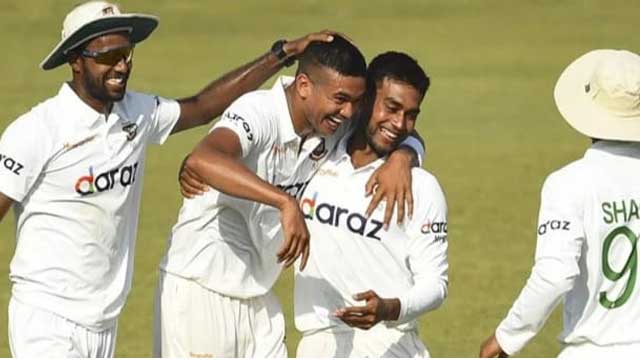 Bangladesh came all guns blazing to crush Zimbabwe by 220 runs in the one-off Test, denying the hosts dogged resistance on the fifth and final day of the game at the Harare Sports Club today.

Zimbabwe batsmen indeed put a herculean effort to resist tireless Bangladeshi bowlers till two sessions on day five before they were shot out for 256, chasing a record 477-run target.

This was Bangladesh’s second largest victory by runs and only 15th Test victory in 124 matches.

Off Spinner Mehidy Hasan Miraz, who scalped 5-82 in the first innings, returned figures of 4-66 to play a perfect foil to Taskin. Shakib Al Hasan and Ebadot Hossain took the rest of the two wickets.

Resuming the day on 140-3, luck seemed to be with Zimbabwe as Bangladesh fielders shelled the catch of overnight batsmen Donald Tiripano and Dion Myers quite a few times.

But this was only a spot of bother in an otherwise perfect Test of the Tigers. Mehidy Miraz broke the through after the first drinks break of the day as Dion Myers chipped one straight to short mid-wicket to be fallen for 26.

Taskin then joined the party, dismissing Roy Kaia for naught and Regis Chakabva for 1 in his consecutive overs to expose Zimbabwe’s vulnerable lower order.

As Bangladesh looked all set to wrap up the match, unexpectedly Donald Tiripano gave Bangladesh a torrid time and delayed the inevitable. Tiripano firstly added 34-run with Victor Nyauchi, before Taskin squared up the latter with short ball for 10.

Ebadot who was largely unimpressive amongst the Bangladeshi bowlers, got the prized scalp of Tiripano when he edged one to behind the wicket, that ended his 52 runs knock for which he played 144 balls. Tiripano’s dismissal however was dubious as the replay showed the ball brushed his thigh pad instead of his bat.

Blessing Muzarabani was the other batsman who played with steely resolve but Mehidy Miraz brought an end to Zimbabwe’s innings in an extended tea session, rattling the stump of No.11 batsman Richard Ngarava for 10.

Zimbabwe however had a hope when stand-in skipper Brendan Taylor counterattacked in style on day four, clobbering 92 off 73, which included 16 fours.

Taylor’s dismissal brought a sigh of relief in the Bangladesh tent as they knew the inexperienced batting line up of Zimbabwe would have to produce a miracle to win the game, specially when they have to break the world record.

The highest successful chase in the fourth innings remains 418 by West Indies against Australia. Zimbabwe’s own highest fourth innings total was 331, which they scored against New Zealand in 2011 in a losing-cause.

Earlier Bangladesh were able to throw this huge target to Zimbabwe thanks to Shadman Islam and Nazmul Hossain Shanto, who earlier on the day four batted with flair and guts.

Shadman struck his maiden century while Nazmul Hossain Shanto brought up his second century in his Test career to leave Zimbabwe a record chase to win.

Shadman was not out on 115 off 196, hitting nine fours while Shanto remained unbeaten on 118 ball-117, which studded with five fours and six sixes as Bangladesh declared their second innings on 284-1.

Only two teams have got a bigger second-innings lead in Tests than Bangladesh's 476, while losing one or no wicket in their second innings.

Opener Saif Hassan was the only dropped wicket after hitting 43 runs. He and Shadman shared 88-run for the opening stand after which Shadman and Shanto added an 196-run for an undefeated second wicket stand.

Bangladesh compiled 468 in their first innings, thanks a career-best 150 not out off Mahmudullah Riyad after which Mehidy Hasan Miraz (5-82) and Shakib Al Hasan (4-82) shared nine wickets between them to wrap Zimbabwe first innings for 276.