Mehidy guides Bangladesh to a thrilling win against India 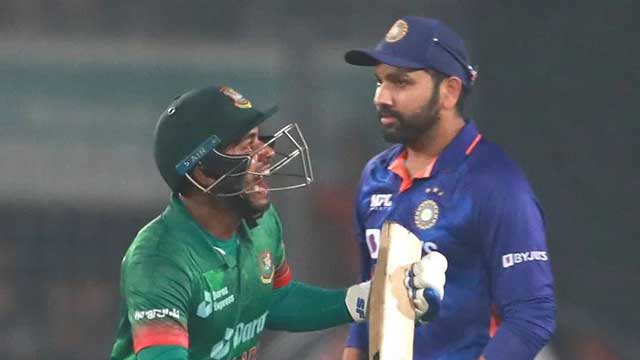 Bangladesh bounced back from the jaw of defeat after Mehidy Hasan Miraz stepped up with an astonishing batting to guide the Tigers to dramatic one-wicket win over India in the first of the three-match one-day international series at the Sher-e-Bangla National Stadium on Sunday.

Mehidy, who hit unbeaten 38 off 39 balls, formed a 41-ball 51-run partnership with Mustafizur Rahman, who also remained unbeaten on 10 off 11 balls, in the last wicket stand to safeguard the Tigers to 187 in 46 overs.

Earlier, with Shakib Al Hasan and Ebadot Hossain scalping their career best 5-36 and 4-47 respectively, India were all-out for a moderate 186 in 41.2 overs.

Stand-in-captain Liton Das made highest 41 off 63 balls for the hosts.

Mohammad Siraj was the standout bowler for the visitors claiming 3-32 while Kuldeep Sen, Washington and Deepak Chahar, Shardul Thakur Sundar took two and one wickets each respectively.