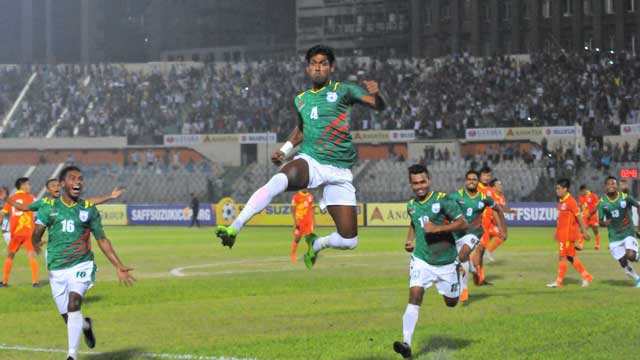 Topu Barman put the hosts ahead in the third minute from a penalty they had won in their first attack at the Bangabandhu National Stadium in Dhaka on Tuesday.

Mahbubur Rahman Sufil extended the lead in the beginning of the second half with a brilliant goal.

Bhutan had defeated Bangladesh 3-1 when the two teams met for the last time in the playoff for qualifiers of Asian Cup in October, 2016.

With Tuesday’s 2-0 victory, Bangladesh have continued their dominance over Bhutan. Bangladesh won have five and drawn one in the six matches they have played in the tournament’s different editions.

This was also Bangladesh’s first victory after they beat Sri Lanka 4-2 in Bangabandhu Gold Cup in January, 2016.

After the kick-off, Bangladesh had a corner in their first attack. The referee pointed to the spot when Saad Uddin was pushed to the ground as he was trying to meet the ball from Wali Faisal's corner.

Topu made no mistake from the 12 yards to give Bangladesh the lead.

Both teams then missed several chances before Sufil"s spectacular half-volley from the right found the top left corner of the net in the 47th minute.

Bangladesh dominated Bhutan in the rest of the Group A match.

In the tournament opener earlier in the day, Pakistan beat Nepal 2-1.