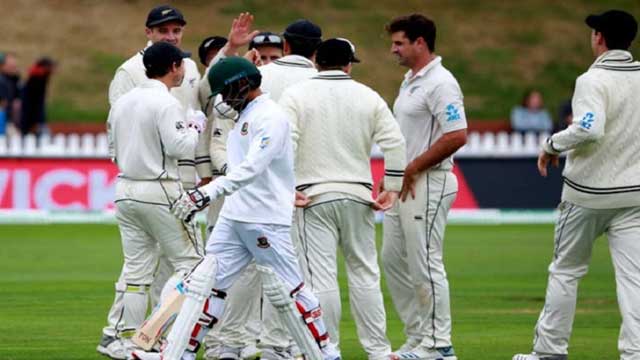 Bangladesh were bowled out for 209 runs in their second innings as New Zealand clinched the Test series 2-0 with a victory by an innings and 12 runs in the second Test at Wellington. Neil Wagner was the hero with the ball, bagging five wickets as his short-ball barrage dismantled the visitors who started today on an overnight score of 80 for three.

Mahmudullah Riyad's 67-run knock was the high point for the Tigers as the other batsmen fared like dear caught in headlights, unable to contend with Neil Wagner's short-ball barrage. Trent Boult bowled fantastically yesterday and picked up two more wickets to finish with four-fer. New Zealand once again completely outclass the Tigers. In post-match ceremony, Mahmudllah regretted dropping Taylor on 20. "Very disappointing. We could have done lot better. We are much better than that. Going forward, we need to adept as soon as we can. I dropped [Taylor's] catch and then another was dropped in the slips. Had we taken those, story might have been different," the Bangladesh skipper said.

49.2 - Ban 187/7, Mahmudullah 52* (49), Mustafizur 8 (7): Mahmudullah swats away an Wagner short ball to long on for four to bring up his 16th Test fifty. It has been a terrific and gutsy knock from the Bangladesh skipper as he was the most convincing among the Tigers batsmen against Wagner's short-ball barrage. Tigers still trail by 34 runs in their second innings.

37.6 - Ban 124/4; Mahmudullah 8* (14), Mithun 39 (88): Mahmudllah Riyad is worried about the short stuff and Neil Wagner who came in for his first over of the day tested the Bangladesh skipper. Two boundaries in that over as Riyad got off the mark but Wagner was able to make him chase one and the ball just fizzed past the attempted pull shot.

28.3 - Ban 98/3; Soumya 18* (41), Mithun 28* (59): Mithun punches it through cover and the batsman decide to run three. They were too leisurely in their approach. Grandhomme chases and throws it. A better collection from stand-in wicket-keeper Bocock would have seen Soumya caught out of his crease. He could have been gone.

Stay updated on the go with The Daily Star Android & iOS News App. Click here to download it for your device.