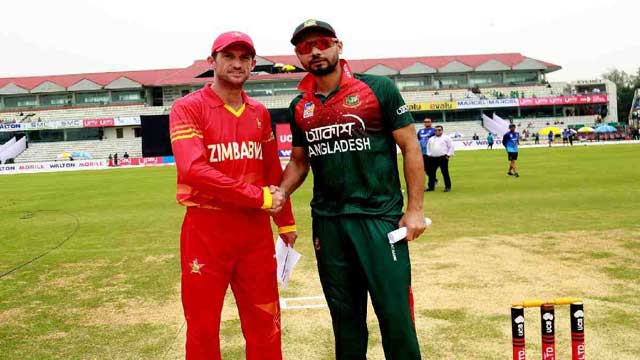 Zimbabwe captain Sean Williams won the toss and opted to bowl first in the third and final match of the three-match series at Sylhet International Stadium on Friday.

This match will be marked as Mashrafe’s last as a skipper. While Mashrafe leading his side for last time, Mushfiqur Rahim was left out to pave a way for the debutant Afif Hossain. The left-handed batsman has played 10 T20Is so far before getting his ODI debut.

Along with Mushfiqur, Najmul Hossain Shanto, Shafiul Islam and Al Amin Hossain were overlooked to give chances to the debutant Mohammad Naim, Mustafizur Rahman and Mohammad Saifuddin.

While Shanto is out due to an injury, Shafiul had to back to Dhaka due to the illness of his father, and Al Amin is rested to give further chance to Saifuddin who came back to the international cricket after a layoff of five-month due to a back injury.

Mashrafe captained Bangladesh for the first time in a Test against West Indies back in 2009 at Kingstown. He, however, couldn’t finish that game due to an injury. Shakib Al Hasan led the Tigers in the remaining parts of that game.

In his first stint as the captain, Mashrafe led Bangladesh in 18 international games starting between July 2009 and October 2010.

He got the captaincy back for the second and final stint in 2014. But this time only for limited-over cricket. Mashrafe announced his retirement from T20Is in 2017, and Shakib became the new T20Is captain. Eventually, Mashrafe was Bangladesh’s captain only in ODIs.