Biden announces key nominations for the Department of State 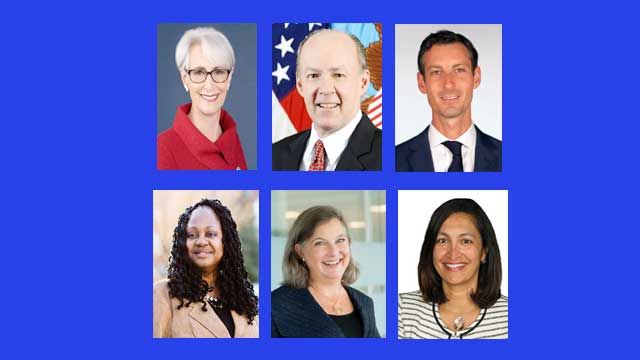 The US President-elect Joe Biden announced key nominations for the Department of State who will work closely with Secretary of State-designate Antony Blinken to build back better at the State Department, renew and reimagine American leadership to keep us safe at home and abroad, and address the defining challenges of our time — from infectious disease, to terrorism, China, nuclear proliferation, cyber threats, and climate change. They will put into practice the President-elect and Secretary-designate’s vision of a foreign policy that promotes America’s security, prosperity, and values, and delivers for the middle class.

These leaders are trusted at home and respected around the world, and their nominations signal that America is back and ready to lead the world, not retreat from it. They also reflect the idea that we cannot meet this new moment with unchanged thinking or habits, and that we need diverse officials who look like America at the table. They will not only repair but also reimagine American foreign policy and national security for the next generation.

President-elect Joe Biden said, “This diverse and accomplished team, led by Secretary of State-designate Blinken, embodies my core belief that America is strongest when it works with our allies. Collectively, they have secured some of the most defining national security and diplomatic achievements in recent memory — and I am confident that they will use their diplomatic experience and skill to restore America’s global and moral leadership. America is back.”

Vice President-elect Kamala Harris said, “This remarkable team of distinguished diplomats and seasoned leaders reflects the very best of our nation. They have the knowledge and experience to help us confront and prevail over the most pressing threats and challenges facing our nation — from cyber to climate. The President-elect and I look forward to working closely with them, and Secretary-designate Blinken, to keep the American people safe while restoring and strengthening our nation’s leadership around the world.”

Secretary of State-designate Antony Blinken said, “To meet this moment, we need a Department of State that looks like America, led by diverse women and men who will be unafraid to challenge the status quo. That is this team. America at its best still has a greater capacity than any other country on earth to mobilize others to meet the challenges of our time. These passionate, energetic, deeply experienced nominees will help keep our people and our country safe, secure, and prosperous. If confirmed, it will be the honor of my life to work with them to reinvigorate the power of America’s example.”

Wendy R. Sherman is nominated to be Deputy Secretary of State. A trusted advisor to President-elect Biden and Vice President-elect Harris, Ambassador Sherman is one of the country’s foremost diplomats. She has successfully rallied the world to strengthen democracy and confront some of the biggest national security challenges of our time, including leading the U.S. negotiating team for the Iran Deal as Under Secretary of State for Political Affairs. During her four years as Under Secretary, she traveled to 54 countries, engaged in diplomacy on every continent and was awarded the National Security Medal by President Obama for her diplomatic achievements.

Brian P. McKeon is nominated to be Deputy Secretary for Management and Resources. He is a long-time foreign policy advisor to President-elect Biden, having worked with him for over 25 years in the Senate, the White House, the Biden for President campaign, and the Biden-Harris Transition. McKeon has served in a number of high-profile national security positions, keeping Americans safe and secure throughout his career, including as Principal Deputy Under Secretary of Defense for Policy and concurrently as Acting Under Secretary of Defense.

Bonnie Jenkins is nominated to be Under Secretary for Arms Control and International Security Affairs. A trailblazing leader, Jenkins is the founder and executive director of the Women of Color Advancing Peace, Security and Conflict Transformation (WCAPS) and a member of the Biden-Harris transition State Department Agency Review Team. A highly respected nuclear proliferation expert, she served in the State Department’s Bureau of International Security and Nonproliferation, as the U.S. representative to the 30-nation G-7 Global Partnership Against the Spread of Weapons and Materials of Mass Destruction, and was the State Department lead to four Nuclear Security Summits that took place from 2010 to 2016.

Victoria Nuland is nominated to be Under Secretary for Political Affairs. A respected and trusted U.S. diplomat for 32 years, Ambassador Nuland has worked for five U.S. presidents and nine Secretaries of State of both political parties. Ambassador Nuland has the essential experience and relationships to rally the world around advancing American interests, having served as Assistant Secretary of State for European and Eurasian Affairs, Ambassador to NATO, and Special Envoy and chief negotiator on the Treaty on Conventional Armed Forces in Europe. Holding the highest rank in the U.S. Foreign Service of career ambassador, she has been posted overseas to Russia, China and Mongolia and received distinguished service awards from two Secretaries of Defense.

Uzra Zeya is nominated to be Under Secretary for Civilian Security, Democracy, and Human Rights. With over two decades of diplomatic experience in Near East, South Asian, European, human rights, and multilateral affairs, Zeya will be a champion for putting universal rights and strengthening democracy at the center of our efforts to meet the challenges of the 21st century. Her civil society and diplomatic leadership experience includes serving as CEO and President of the Alliance for Peacebuilding; Acting Assistant Secretary and Principal Deputy Assistant Secretary in the Bureau of Democracy, Human Rights, and Labor; and as Chargé d’Affaires and Deputy Chief of Mission at U.S. Embassy Paris, helping to reach unprecedented levels of bilateral cooperation on climate change, counterterrorism in Africa and the Middle East, and Russia.

Among the others are:

—Suzy George, who was a senior aide to former Secretary of State Madeleine Albright, will be Blinken’s chief of staff.

—Ned Price, a former Obama NSC staffer and career CIA official who resigned in protest in the early days of the Trump administration, will serve as the public face of the department, taking on the role of spokesman.

—Jalina Porter, communications director for Rep. Cedric Richmond, D-La., who is leaving Congress to work in the White House, will be Price’s deputy.