Freedom of expression should never be criminalized: Ned on DSA case against Mushfique, Pinaki

US expresses concern over police harassment, arrests and restrictions on opposition peaceful rallies 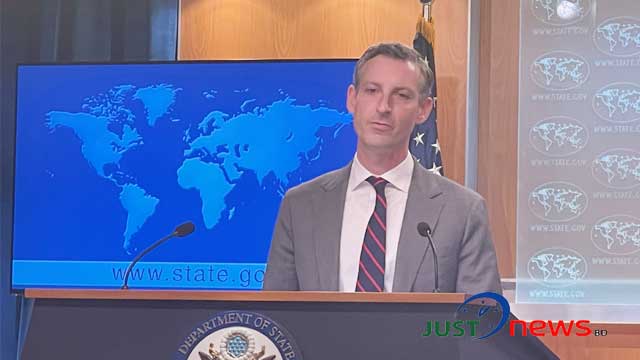 The US has expressed concern about reports of intimidation, political violence, police harassment, arrests of opposition party members and restrictions on the ability of the opposition parties to meet and hold peaceful rallies.

“We call on the government to respect and to protect the fundamental freedoms of expression, association and peaceful assembly,” Ned Price, spokesperson for the US state department, made the remarks in reply to question Bangladesh issues, including the DSA case lodged against US-based internationally acclaimed Bangladeshi journalist Mushfiqul Fazal (Ansari) and France-based exiled writer, human rights and online activist Dr Pinaki Bhattacharya on Wednesday.

Price went on to call on all parties in Bangladesh to respect the rule of law and to refrain from violence, harassment and intimidation.

In briefing, journalist M Mushfiqul Fazal asked, “On Bangladesh: as many times you are urging Bangladesh authority for freedom of press, freedom of association, and I am asking question on Bangladesh and very recently– the government filed cases against me under the Digital Security Acts act, as I asked that question in this briefing room.

But I – I’ll not leave f my free journalism; I’ll keep continuing. On Bangladesh, the current authority is very much attacking freedom of assembly and freedom of association, as the main opposition’s schedule for their grand rally on December 10. And just ahead of this, at least 3,850 opposition leaders, workers, and their family members have been arrested by the people – by the police, by the government. So, what is your comment on that, and how you are observing as very recently a US senior official visited Bangladesh.”

In reply Ned Price said, “Well, let me start where you started because I think it’s important. We’re of course aware that you and some of your colleagues – Pinaki Bhattacharya, Mofizur Rahman – have been charged under the so-called DSA, the Digital Security Act. We have made our concerns about the DSA very clear. We’ve done so in our Human Rights Report. We have had frank and candid conversations with our Bangladeshi partners as well.”

“Freedom of expression should never be criminalized. It should never be a source or a subject of duress or intimidation. Likewise, to the second part of your question, we’re concerned about reports of intimidation and political violence in Bangladesh. We call on the government to respect and to protect the fundamental freedoms of expression, association, and peaceful assembly.”

About repression on opposition activists, the State Department spokesperson said, “We’re also concerned about reports of police harassment, arrests of opposition party members, and restrictions on the ability of the opposition parties to meet and to hold peaceful rallies.”

He further said, “We call on all parties in Bangladesh to respect the rule of law and to refrain from violence, from harassment, from intimidation as well. We call on the Government of Bangladesh to ensure that no party or candidate threatens, incites, or conducts violence against another party or candidate. Genuine elections require the ability of all candidates to engage voters free from violence, harassment, intimidation; and we encourage the government authorities to investigate these reports of violence thoroughly, transparently, and impartially, and to hold the perpetrators to account.”