Trump calls Biden 'not competent' to lead the US 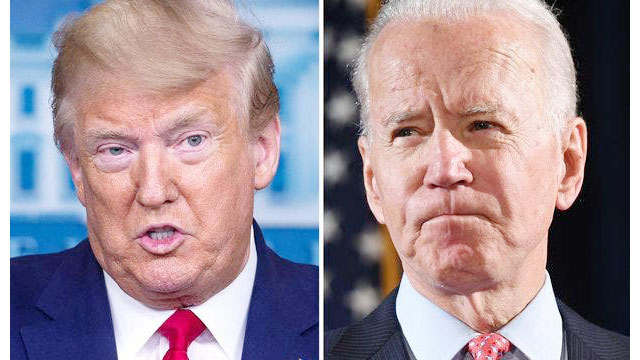 President Donald Trump assailed likely opponent Joe Biden as "not competent" to lead the United States, speaking as polls over the weekend showed deepening voter disenchantment with his own handling of the coronavirus pandemic.

He said that if Biden is elected on November 3, he will "destroy this country."

Facing the multiple challenges of a spreading pandemic, racial unrest and a struggling economy, Trump made several unfounded or highly speculative accusations against the former vice president, saying Biden would "triple your taxes" and "defund the police."

He added broadly that "religion will be gone," referring to Democratic officials banning large church services to stem the virus spread.

Asked whether he would accept the election result in November, even if he loses, Trump echoed his position of 2016, saying, "I have to see ... I'm not going to just say yes."

The interview, which was taped in advance, came as new polling results showed support for Biden increasing as doubts about Trump's handling of the pandemic grow amid a resurgence of infections in many states.

Interviewer Chris Wallace told the president that a new Fox opinion poll showed Biden with a substantial lead over Trump not only on his ability to manage the pandemic (with a 17-point edge) and to deal with racial unrest (by 21 points), but even -- by a single point -- on handling the economy, long a Trump strong point.

And a new Washington Post-ABC News poll has Biden leading Trump among registered voters nationwide by a resounding 15-point margin, 55-to-40 percent.

Trump dismissed such polling as "fake," saying White House surveys show him winning both nationally and in key swing states.

He repeatedly pummeled Biden, who has kept a relatively low profile amid the restraints imposed by the pandemic.

Trump claimed that the Democrat wanted to "defund the police" -- a battle cry of some anti-racist protesters -- and insisted that such language was in a Biden policy document, though he was unable to produce it when challenged by Wallace.

As Trump, who is 74, repeatedly questioned his rival's mental acuity, Wallace asked him directly if thought Biden, 77, was senile.

"I don't want to say that," Trump replied. "I say he's not competent to be president."

He questioned whether the Democrat could pass a cognitive ability test that Trump said he had "aced," and said the former vice president would fall apart under tough questioning.

"Let Biden sit through an interview like this, he'll be on the ground crying for Mommy. He'll say, 'Mommy, Mommy, please take me home.'"

Trump again defended his handling of the pandemic, claiming that "we are the envy of the world" on testing; and, of his early prediction that the virus would someday disappear, said, "I'll be right eventually."

He again opposed any national mandate for mask-wearing, saying, "I want people to have a certain freedom."

Biden responded on Sunday, saying in a statement focused on the pandemic that "it's long past due for President Trump to listen to somebody other than himself in how to fight this virus, because after six straight months of deadly mismanagement it is spiraling even more out of control.

"Mr President, your ignorance isn’t a virtue or a sign of your strength — it’s undercutting our response to this unprecedented crisis at every turn," he added.-AFP