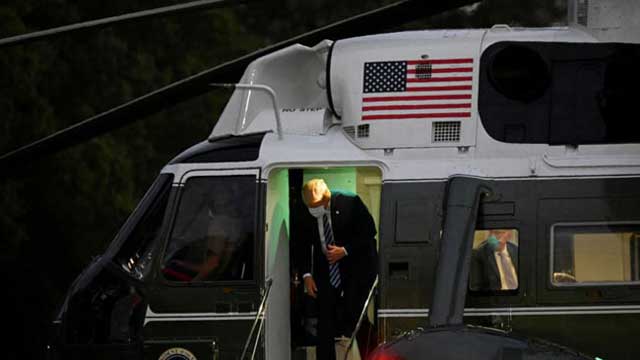 He immediately ignited a new controversy by declaring that despite his illness the nation should not fear the virus that has killed more than 210,000 Americans.

Besides, the president entered the White House without a protective mask.

Trump's message alarmed infectious disease experts and suggested the president’s own illness had not caused him to rethink his often-cavalier attitude toward the disease, which has also infected the first lady and several White House aides, including new cases revealed on Monday.

Landing at the White House from Marine One, Trump gingerly climbed the South Portico steps, removed his mask and declared, “I feel good.”

He gave a double thumbs-up to the departing helicopter from the portico terrace, where aides had arranged American flags for the sunset occasion. He entered the White House, where aides were visible milling about the Blue Room, without wearing a face covering.

The president left Walter Reed National Military Medical Center, where his doctor, Navy Cmdr. Sean Conley, said earlier on Monday that the president remains contagious and would not be fully “out of the woods” for another week but that Trump had met or exceeded standards for discharge from the hospital.

Trump is expected to continue his recovery at the White House, where the reach of the outbreak that has infected the highest levels of the U.S. government is still being uncovered.

Still, just a month before the election and anxious to project strength, Trump tweeted before leaving the hospital, “Will be back on the Campaign Trail soon!!!”

And in case anyone missed his ‘don't-worry message’ earlier, he rushed out a new video from the White House.

Trump’s nonchalant message about not fearing the virus comes as his own administration has encouraged Americans to be very careful and take precautions to avoid contracting and spreading the disease as cases continue to spike across the country. For more than eight months, Trump’s efforts to play down the threat of the virus in hopes of propping up the economy ahead of the election have drawn bipartisan criticism.

“We have to be realistic in this: Covid is a complete threat to the American population,” Dr. David Nace of the University of Pittsburgh Medical Center, said of Trump's comment.

“Most of the people aren’t so lucky as the president,” with an in-house medical unit and access to experimental treatments, added Nace, an expert on infections in older adults.

“It’s an unconscionable message,” agreed Dr. Sadiya Khan of Northwestern University Feinberg School of Medicine. “I would go so far as to say that it may precipitate or worsen spread.”

According to the Centers for Disease Control and Prevention of the US, those with mild to moderate symptoms of Covid-19 can be contagious for as many as — and should isolate for at least — 10 days.

Trump's arrival back at the White House raised new questions about how the administration was going to protect other officials from a disease that remains rampant in the president's body.

There were also lingering questions about potential long-term effects to the president — and even when he first came down with the virus.