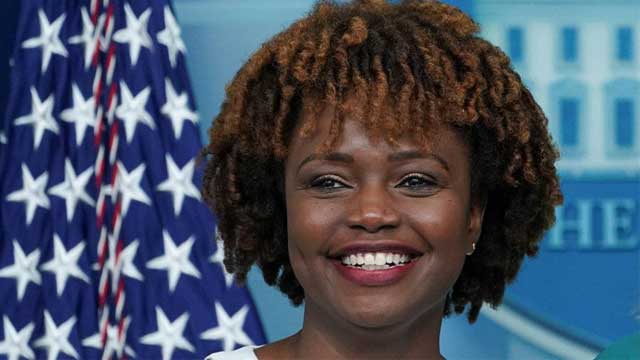 The US President Biden has named Karine Jean-Pierre as his new top spokesperson - the first time a black, or openly gay, person has held the role.

Ms Jean-Pierre, 44, has served as the administration's principal deputy press secretary since Mr Biden was elected.

She will replace outgoing press secretary Jen Psaki, 43, in the top role at the end of next week.

Ms Psaki is taking up a job at the left-leaning MSNBC cable news outlet.

On Twitter, she called her successor a "remarkable woman" with "a moral core".

"I can't wait to see her shine as she brings her own style, brilliance and grace to the podium," she said.

The White House press secretary is a presidential administration's face to the national media and, by extension, to the country and the world.

The individual can become an instantly recognisable figure in times of national crises or political scandal. They often develop cult-like followings among some - and are the butt of jokes for others.

For the first time in US history, the face of an administration will be that of a black woman, and of one who is openly gay.

The groundbreaking announcement underscores a Biden administration that has placed an emphasis on putting black women - frequently considered an essential, but politically invisible part of the Democratic Party coalition - in positions of power.

While press secretaries do not set policy, they help shape the public perception of an administration. Jean-Pierre has a challenging high-wire act ahead of her.
Presentational grey line

Ms Jean-Pierre, previously an analyst at MSNBC, brings more than two decades of experience in Democratic politics to the role.

Born on the French Caribbean island of Martinique and raised in Queens, New York, she was a key political director in the Obama administration.

During the 2016 presidential election, she was the national spokeswoman for MoveOn, a major liberal advocacy group.

Before joining the White House press team, she served as chief of staff to Kamala Harris, after she was chosen as Mr Biden's vice-presidential nominee.

Ms Jean-Pierre's appointment comes ahead of crucial mid-term elections this November that will determine how the rest of Mr Biden's presidency turns out.-BBC