US will not be intimidated by reckless Putin: Biden 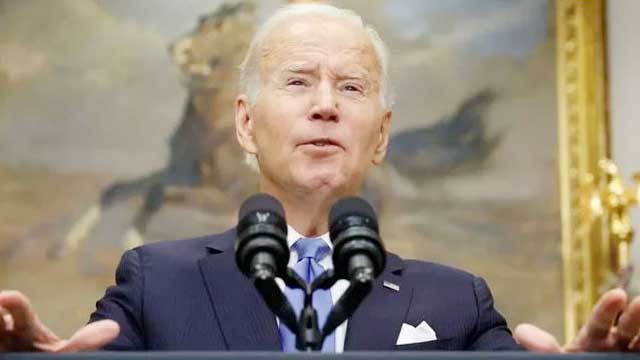 The US President Joe Biden has warned Russia that the United States will not be intimidated by reckless threats after Vladimir Putin declared the annexation of four occupied regions of Ukraine.

On Friday, President Putin appeared to make a veiled threat to use nuclear weapons to defend those regions.

He said they would "forever" be Russian - but Ukraine vowed to liberate them.

Nato chief Jens Stoltenberg said the Russian move was "the most serious escalation since the start of the war".

In a speech in Moscow, the Russian leader claimed citizens in Ukraine's eastern Donetsk and Luhansk regions, as well as in Kherson and Zaporizhzhia in the south had voted to be "with their people, their motherland".

He was referring to so-called referendums held in the regions in recent days, but Ukraine and Western governments have condemned the votes as a sham.

Much of Mr Putin's speech was used to rail at the West.

He said the US had created a "precedent" by using nuclear weapons against Japan at the end of World War Two, in an apparent threat.

Mr Putin last week said his country had "various weapons of destruction" and would "use all the means available to us", adding: "I'm not bluffing."

The Kremlin has made clear that any attack on the regions claimed by Russia would be seen as an attack on Russian soil, signalling an escalation in the war.

Russia does not fully control any of the four regions, and in his speech Mr Putin did not clear define the borders.

President Biden called out his Russian counterpart's "reckless words and threats", but added that Mr Putin was "not going to scare us".

"America and its allies are not going to be intimidated," President Biden said at the White House.

He then addressed the Russian president directly, pointing his finger into the camera.

"America's fully prepared, with our Nato allies, to defend every single inch of Nato territory," he said, in reference to the Western security bloc.

Shortly after, Mr Biden's top national security official said while there was a chance of Moscow resorting to nuclear weapons, there did not appear to be an imminent threat. -BBC