Trump exults over acquittal in US Senate impeachment trial 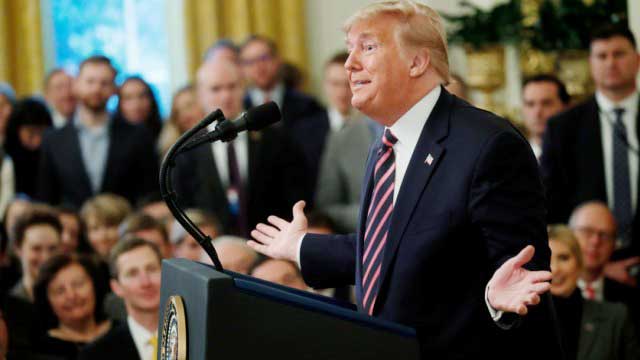 US President Donald Trump delivers a statement about his acquittal in his Senate impeachment trial during what he described as "a day of celebration" in the East Room of the White House in Washington, US, February 6, 2020. Photo: Reuters

US President Donald Trump celebrated his acquittal on impeachment charges with a pair of caustic, freewheeling speeches on Thursday that drew on White House pomp and the solemnity of an annual prayer breakfast to underscore the fact that he remained in office.

After walking down a red carpet to a standing ovation from scores of Republican lawmakers, administration officials and conservative media figures in the East Room of the White House, Trump re-aired old grievances and accused Democrats of staging a "corrupt" effort to undermine his presidency in a speech lasting more than an hour.

"I've done things wrong in my life, I will admit ... but this is what the end result is," Trump said, holding up a copy of the Washington Post with the headline "Trump acquitted."

The Republican president then handed the newspaper to his wife, Melania, and said maybe they would frame it.

Speaking without a teleprompter, he referred to the 22-month investigation by former US Special Counsel Robert Mueller into his 2016 election campaign's possible contacts with Russia, using a profanity.

"It was all bullshit," he said.

The Republican-controlled Senate voted on Wednesday to acquit Trump on charges brought by the Democratic-led House of Representatives stemming from his dealings with Ukraine, only the third time in US history that a president has been impeached.

The acquittal was Trump's biggest victory yet over his foes in Congress, who had attacked Senate Republicans for refusing to call witnesses or seek new evidence at the trial.

Earlier on Thursday, Trump spoke at the annual National Prayer Breakfast, a historically bipartisan event attended by House Speaker Nancy Pelosi, faulting those who invoked their religious faith during the impeachment battle.

Pelosi, a Catholic who launched the impeachment inquiry in September, said in December that she did not hate Trump and that she prayed for him. Republican Senator Mitt Romney, a Mormon, cited his faith when he voted to convict Trump on the charge of abuse of power. Romney was the only Republican to vote for conviction. No Democrat voted to acquit.

"I don't like people who use their faith as justification for doing what they know is wrong. Nor do I like people who say 'I pray for you,' when they know that that's not so," Trump said at the breakfast as Pelosi sat nearby on the stage.

Trump, who has strong support from evangelical Christians and conservative Catholics, referred to the issue again in the East Room: "I doubt she (Pelosi) prays at all."

Pelosi said that Trump's comments at the breakfast, the theme of which was "loving your enemies," were inappropriate.

"He's talking about things he knows little about - faith and prayer," she told a news conference.

In his East Room speech, which was interrupted several times by thunderous applause and laughter from the audience, Trump called former FBI Director James Comey a "sleazebag" and Representative Adam Schiff, the House Democrat who spearheaded the impeachment drive, a "vicious, horrible person." He also reprised his attacks on 2016 Democratic rival Hillary Clinton.

At the same time, he thanked dozens of Republican lawmakers by name, working alphabetically from a list.

The hyper-partisan tenor of Thursday's events did not bode well for the already sharply divided mood in Washington, especially in an election year. Trump is running for re-election in November.

Democrats said Trump wasted an opportunity to bring the country together.

"Instead of self-victimizing and self-aggrandizing, instead of being spiteful and vindictive, President Trump could have used his nationally televised speech to show some contrition and unite the nation," said Senate Minority Leader Chuck Schumer.

Senate Republicans voted to acquit Trump of abuse of power for pressing Ukraine to investigate political rival Joe Biden, a contender for the Democratic nomination to face Trump on November 3, and of obstructing a congressional investigation of the matter.

Democrats said the acquittal did not exonerate Trump.

"No one believes he did nothing wrong," Senator Bob Casey told Fox News on Thursday.

Democrats were unclear, however, about their next steps in investigating Trump. There are several pending court cases related to Democratic efforts to get more information, and Pelosi has issued a statement saying the House would protect the Constitution "both in the courts of law and in the court of public opinion."

Trump heads into the campaign with the advantages of a powerful fundraising machine and near universal support from Republicans. His job approval ratings have remained fairly consistent throughout his presidency and the impeachment process, as his core conservative supporters stuck with him.

The latest Reuters/Ipsos poll released on Thursday showed 43% of Americans supported Trump's acquittal against 41% opposed and 17% undecided, even though more respondents than not think he probably did something wrong.