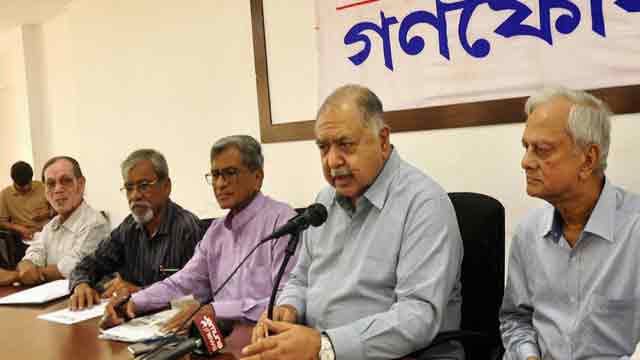 Addressing a news conference at National Press Club, Kamal Hossain, one of those who drafted Bangladesh's constitution, asked the government to refrain from 'unlawful' arrest by plainclothes men otherwise they( Gana Forum) would go to court.

He expressed concern over picking up students by plainclothes men without admitting their arrest by the law enforcers and disclosing after 3 to 4 days.

Kamal said they want there would be an election and a fair atmosphere for all political parties before the polls.

But the opposite thing is being taken place, he said.

He mentioned that a good number of leaders and activists of main opposition (BNP) were arrested on Monday after its human chain programme.

He said such trend of arrest should not take place.

Without naming BNP chairperson Begum Khaleda Zia, the Gana Forum president said an ailing person should not be harassed and given pain.

He said existing law does not allow arrest by plainclothes police, saying such incidents of violating the law may be happened one or two times for special reason but it went on regularly means disobeying the constitution.

He said before arresting anybody police has to show arrest warrant, why the person is being arrested, where the person is taken and has to produce the arrested one before the court within 24 hours.

Replying to a question, he said the court would decide whether set up court inside jail is constitutional or unconstitutional.