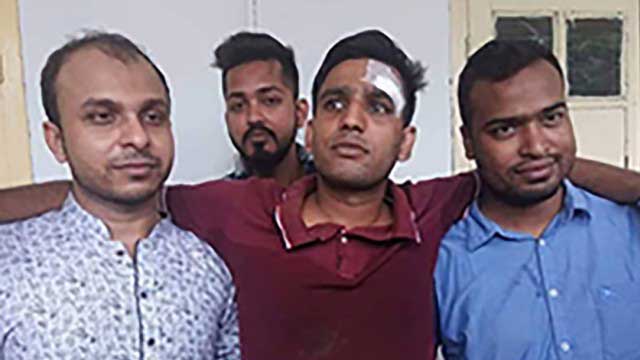 Two central leaders of Bangladesh Chhatra League beat each other up in Dhaka University area this afternoon.

Eyewitnesses said, BCL president Shovon boarded his car at 1:00pm to go somewhere from Madhur Canteen. Along with Shahriar and Touhidul, senior vice-president Al Nahian Khan Joy was also inside the car with the president.

After going few yards, the car stopped and everyone except Shovon got off. Then, Touhidul and Shahriar started to hit each other with bamboo sticks and brickbats, eyewitnesses said, adding that the scuffle originated from disagreement over the sitting arrangement inside Shovon's car.

Later, Shovon hurried down from the car and refrained them from fighting, eyewitnesses also claimed.

Shahriar, who got a cut over his left eye, was admitted to Dhaka Medical College Hospital (DMCH) immediately while BCL president Shovon took Touhidul away in his car. Shahriar received six stiches.

Contacted, Touhidul denied the allegation saying there was no incident of beating.

HOwever, talking to The Daily Star, Shahriar alleged Touhidul attacked him suddenly because of his stance against syndicate.

“Touhidul is an activist of party syndicate. Those who are involved with BCL’s politics for many years could be a victim of his wrath,” said Shahriar.

Asked, BCL president Shovon said this was nothing but a personal conflict between the duo.

Dhaka University correspondent of the Daily Inqilab, Nur Hossain alleged that Chhatra League President Rezwanul Haque Chowdhury and Senior Vice President Al Nahyan Khan forcibly dragged him into the car when he was filming the incident of scuffle.

The BCL leaders forcibly deleted the video from Nur’s mobile and dropped him from the car at Hatirpool area. Asked about the matter, however, the president and senior vice president have denied the allegations.