Why climate action needs to target the border industrial complex 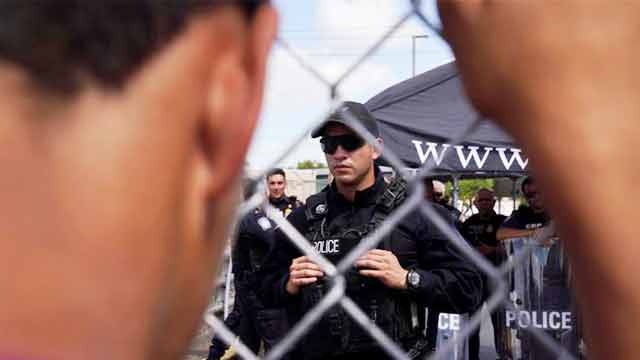 A young asylum seeker grasps the gate of the Gateway International Bridge as US Customs and Border Protection agents guard the port of entry on October 10, 2019 [Veronica G Cardenas/Reuters]

In the last few months, all publicly known banking partners of the US private prison and immigrant detention leader GEO Group have committed to severing their ties with the industry. The banks' decision was a major win for campaigners and grassroots activists who have long been working to stop the flow of capital into companies profiting from the destructive combination of mass incarceration in the United States, more aggressive border control policies and increased migration flows exacerbated by climate change.

The survival of private prisons depends on keeping a consistent and increasing number of people incarcerated and today immigrants serve as this predatory industry's primary cash generators. According to a report by the New York Times, last year, private companies incarcerated about nine percent of the total US prison population, but 73 percent of immigrant detainees.

Meanwhile, a growing body of evidence points to climate change being the "silent driver" behind the immigration from Central America and southern Mexico to the US. While violence, organised crime, systemic corruption and poverty, which in many ways are the result of a long history of US meddling and militarism in the region, are the most cited reasons for the exodus from South to North America, experts say climate change in the region is exacerbating - and sometimes causing - these problems, and forcing people to move.

The connection between displacement and climate change is not exclusive to the Americas.

Similarly, some researchers link Syria's devastating conflict, which displaced millions of people, to a drought made worse by climate change. The climate emergency in Africa's Lake Chad region is also believed to have contributed to the rise of Boko Haram - an armed group that has displaced over two million people.

In other words, many of the displaced today - in the Americas, the Middle East and Africa alike - are being driven from their homes, at least in part, because of the destructive effects of climate change. And this seems to be just the beginning.

A new report by the Red Cross estimates that within 10 years, 150 million people will require humanitarian assistance due to the climate crisis. This builds upon alarming predictions from the World Bank and the UN's International Organization for Migration that there could be 143-200 million climate migrants by 2050.

All this makes the fight against corporations, like GEO Group, that stand to profit from the expansion of the climate crisis even more urgent. And it is important to take action not only against private prisons and detention centres, and the corporations that run them, but also more generally against the growing global border-industrial complex which is feeding on the suffering and devastation caused by climate change.

Western governments from Washington to Canberra view the climate crisis through the lens of national security. Even though they are the primary cause behind global warming, they are constantly looking for ways to separate themselves from its consequences.

This is why the world's biggest polluters - including the US, which has emitted more metric tonnes of greenhouse gas pollution than any other country since the Industrial Revolution - are constructing unprecedented border regimes. These governments are seeing climate migrants not as people but "security threats" and heavily investing in private companies that are promising to eliminate this threat using walls, bullets, drones and cages.

Thanks to the Western fear of migrants and unwillingness to come up with a sustainable and humane solution to the climate crisis, this border-industrial complex has grown strong enough to help shape national immigration policies and fuel militarisation and human rights abuses across the world.

The US' dependence on this industry has reached the point where its budget for border and immigration control has gone up more than 15-fold in the last 25 years and increased by an astonishing 133,567 percent since 1980.

We are seeing similar trends elsewhere in the world. In 2009, the European market for border control security was estimated to be between 6 and 8 billion euros ($7-9bn). Today, this market is estimated to reach 50 billion euros globally ($57bn) by 2022.

The expanding reach of this mercenary industry into security, surveillance and detention operations across the Western world has implications for the freedom and rights of everyone, not only the millions who are forced to seek sanctuary in these countries for reasons beyond their control.

For those in the West, it means that private corporations focused on financial gain will be increasingly responsible for policing. For migrants and refugees, it means facing more exclusionary border policies and violence. There will be more walls and detention centres and more impunity for repressive tactics, delivered through a suite of corporate service providers gearing up to profit from abusive responses to the climate crisis.

This expanding "border industrial complex" is the nexus between border policing, militarisation and financial interest. It is the product of Western governments that are unwilling to respond humanely to a crisis of their own making.

This is why, in the aftermath of the largest international mobilisation around climate inaction, the movement must turn its attention to the human rights abuses linked to climate-induced displacement and migration.

We cannot resign ourselves to a climate future defined by walls, bullets, drones, cops and cages. The banks' decision to sever ties with the GEO group is proof that grassroots campaigns can bring meaningful change. We now need to expand our efforts to bring down the entire border-industrial complex.-Al Jazeera

Todd Miller is an independent journalist and writer based in Tucson, Arizona.