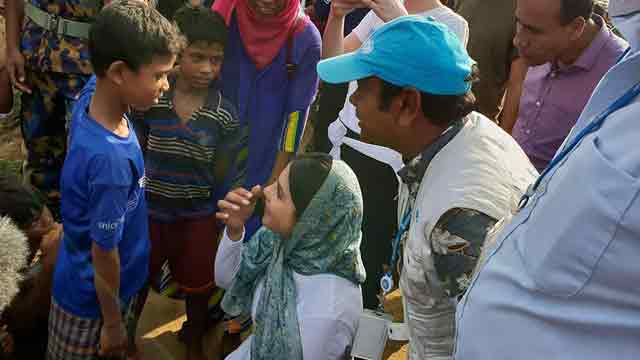 Dhaka, May 21 (Just News): Glitz and glamour are not all that matter to Bollywood and Hollywood superstar Priyanka Chopra, who visited the Rohingya camp at Shamlapur of Teknaf upazila in Cox’s Bazar on Monday to get a first-hand idea on the condition of the displaced refugees.

After taking a flight to Cox’s Bazaar airport at 11:30am, the actor first went to her hotel in Inani and later reached the camp by road at around 4:30pm, where she spoke to the refugees.

Priyanka is also set to visit the Balukhali and Jamtoli camps on Tuesday morning, and later the Teknaf camp. Subsequently, she is slated to visit Kutupalong camp on Wednesday, and leave Cox’s Bazar on Thursday.

Priyanka Chopra is the Goodwill ambassador for Unicef, and she is visiting the camps under this capacity.

Cox’s Bazar District Additional Superintendent of Police Afrazul Haque Tutul said: “Priyanka reached Inani by road from Cox’s Bazaar airport, where she is staying at a five-star hotel. She set out to meet the refugees around 4pm, and is currently at the Shamlapur Rohingya camp in Teknaf’s Baharchhara area. She will be returning to her hotel following the excursion.

“Tomorrow, she will set out for the Balukhali and Jamtoli Rohingya camps in the morning, and later for the Teknaf Rohingya camp. On Wednesday, she will travel to the Kutupalong camp before she leaves the district by plane on Thursday,” the superintendent added.

Priyanka Chopra herself arrived in Bangladesh near immediately after attending the royal wedding between Prince Harry and Meghan Markle on Saturday.

The Bollywood actor has previously worked for causes related to the environment, health, education, and women’s rights in the past. Last year, she visited Jordan to meet refugee children from Syria.