Life of a Maestro Ayub Bachchu 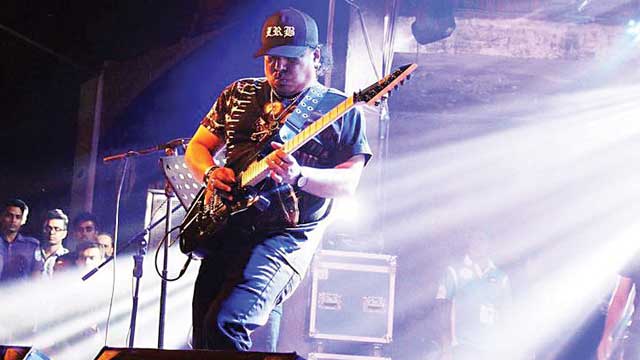 Dhaka, Oct 18 (Just News): Ayub Bachchu, who popularised rock music in Bangladesh alongside his band LRB (Love Runs Blind), has been the heart of Bangladeshi rock music for more than 25 years his evergreen persona.

Bachchu mostly known as AB is the legendary name in the history of Bangladeshi Band Music. He was born in Chattogram on August 16, 1962.

AB has started his music career from his birth place with the band Feelings in 1978. Then he has joined the band Souls in 1980, one of the pioneers in the band movement of Bangladesh, according to LRB website.

In 1991 AB left Souls after 10 long years of practice for perfection and formed LRB. AB brought up LRB from the deepest of his impulse, it's something beyond high devotion for music.

LRB started playing live gigs in the following years and ushered in a new chapter in the history of music in Bangladesh. With its eagerness to create something revolutionary, LRB debuted with a double album in 1992.
Bachchu's band performed more than thousands of gigs in the home (500+ open air & 2000+ indoor) and abroad, according to its website.

They went for their first international tour in USA and they played at 7 states. LRB is the only Bangla Rock Band which played their music in the famous Medicine Square Garden (New York).

His first show outside Bangladesh was held in India in 1997.

Bachchu performed in seven states during his tour of the United States in 1998, according to the LRB website.

LRB believe in self-criticism, in the salvation of their souls. That is why the entity and the band remain unparallel in their type of music.

In Europe the band played its first show in Austria in the year 2002. They also have performed at Wembley Arena (London), Alan Garden (London) Frankfurt of Germany, Fort Canyon Park stage (Singapore).

AB was honored in IIM Joka 'Rock Fest' (India), Benson and Hedges Star Search 1 and 2, DRockstar 1 and many other local competitions as a Judge.