Goosebumps 2: A sequel that fails to live up to its promise 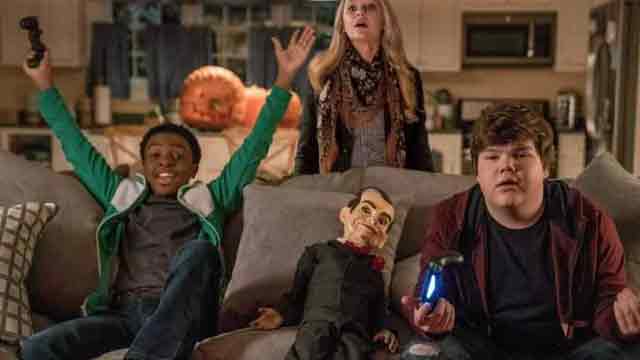 Dhaka, Oct 27 (Just News): The second film in the Goosebumps franchise doesn't trudge far away from the 2015 film's template. A sleepy quiet town? Check. A creepy quiet place wherefrom magic gets unleashed? Check. A single parent who will fall in love towards the end of the film? Check. Slappy? DOUBLE CHECK. Slappy, the evil dummy that just wants to see the world burn, is the thread that connects the first and the second films.

The story opens with Sarah (Madison Iseman) applying to Columbia University, but she is stuck with writer's block as she is unable to write about fear. Her younger brother Sonny is obsessed with Tesla, Wardenclyffe's favourite child and wants to replicate the famous Wardenclyffe tower that can transmit electricity wirelessly, referred to as the OG Wi-Fi, in a miniature form for his school project.

He is helped in this by his friend Sam Carter, with whom he has also started a garbage cleanup business, creatively named Junk Bros (though not much is done with this). The Junk Bros receive a mysterious call to an abandoned house on the eve of Halloween to clean out the garbage. Here they chance upon a secret room which has a secret chest on which rests a single locked book and a key.

With so many red flags, we hope the characters have better sense than to open it, but nope, they open it and out comes Slappy.Slappy (voiced by Mick Wingert unlike in the last film, which had Jack Black doing it) is hilariously evil as soon as he is brought alive. But the writing falters here, and instead of the character being built up progressively, what we get are rushed scenes that do not help in setting up the mood for the film nor a motive for Slappy.

In the Night of the Living Dummy series, Slappy is a terrific villain because all he wants is to be accepted as a family member. Here, however, Slappy sets his sights at world domination. Sonny, the token nerd in this film, doesn't get to show any of his nerdy qualities. That Sarah is portrayed as a great writer with writer's block is a terrific concept to explore in a horror film, but sadly, that is not explored here either.

The film descends into a CGI fest in the second half, and if you are a fan of the series like me, all you can do to keep yourself entertained is play spot-the-monster-from-the-books. As in the first film, these action scenes are perfunctory at best. The film finds its feet somewhat towards the end when Jack Black returns in his role as RL Stine.

There is one hilarious balloon scene where he exclaims, "I knew I came up with that one first," a clear jibe at Stephen King's It. He also has the best line in the film when he says, "All the horrors in the world, yet none hold a candle to the horror of a blank page." It's just too bad that this film is more blank page than real horror. I just hope that the sequel this film promises towards the end gets the franchise back to form.