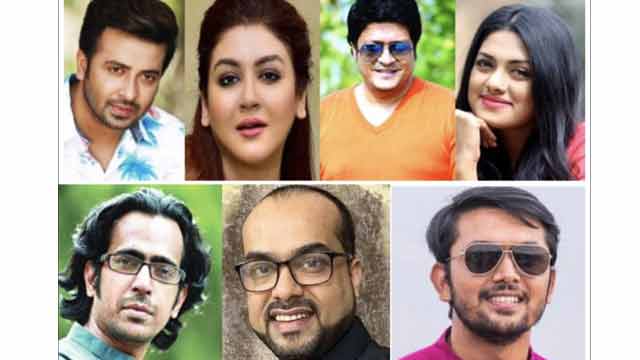 The names of recipients of National Film Award 2017 and 2018 were announced today under 27 and 28 categories respectively, said a gazette notification of the Information Ministry.

Eminent film actor ATM Shamsuzzaman and actress Salma Begum Sujata jointly won the lifetime achievement award of 2017 for their contributions to the film industry while actor, producer and director MA Alamgir and actor Prabir Mitra won the lifetime award for 2018.

Badrul Anam Soud has been adjudged the best director for his film “Gohin Baluchar” for 2017 and Mustafizur Rahman Manik won the award for film ‘Jannat’ for 2018.

Ferdous Ahmed and Sadik Md Saiman (Saiman Sadik) have been adjudged for best actor for films ‘Putra’ and ‘Jannat’ respectively for 2018.

The best actress in leading role award 2017 went to Nusrat Imrose Tisha for film ‘Halda’ while Joya Ahsan won the award for 2018 for her role in film ‘Debi’.

The best actor in supporting role award 2017 went to Md Shahadat Hossain for ‘Gahin Baluchar” while Ali Raz won the award for 2018 for ‘Jannat’.

The best supporting actress award 2017 jointly went to Subarna Mustafa and Runa Khan for their films ‘Gahin Baluchar’ and ‘Halda’ while Sucharita won the award for 2018 for film ‘Meghkonya’.

Zahid Hasan was awarded the best villain in the film “Halda” for 2017 while Sadeq Bachchu won the award for 2018 for film ‘Ektee Cinemar Golpo’.

Mamtaz Begum was adjudged the best female singer for her song “Na Jani Kon Aporadhe” in the film “Satta” for 2017 while the award for 2018 jointly went to Sabina Yasmin for her song “Bhule Man Oviman’ in film ‘Putra’ and Akhi Alamgir for her song ‘Golpo Kothar Oi’ in film ‘Ektee Cinemar Golpo’.