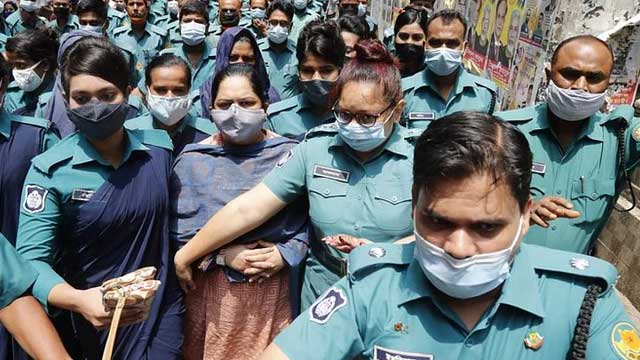 A statement has been issued by 83 eminent citizens of the country, demanding bail and the unconditional release of Prothom Alo's senior reporter Rozina Islam in the case filed by the health ministry.

They said in the statement, "We strongly demand that the immediate withdrawal of the motivated case against Rozina Islam, her unconditional release, an inquiry into those response for harassing her and for them to be brought to book."

They said that everyone including the civil society had hoped that she would have been granted bail on Thursday in consideration of the sensitive nature of the incident, the citizen's right to bail and the question of justice. However, the decision on bail order was fixed for Sunday. The eminent citizens said, "The delay by the court in taking a decision regarding Rozina's bail that disappointed and angered us."

They said that all the charges in the case against Rozina were bailable and if she had been granted bail, there would have been no obstacle to the next hearing of the case.

The statement said, "There has been strong protest and reaction from home and abroad about the arrest of senior woman journalist Rozina on fabricated charges by the ministry of health and family welfare. The journalist community, civil society and even senior quarters within the government has issued statements terming the arrest of Rozina as unwarranted and an embarrassment for the government. The United Nations has expressed its concern at the incident too. The issue has appeared in leading newspapers of the world, which had raised questions about the country and government's image in context of freedom of expression and democracy."

Journalist Rozina Islam had been detained at the secretariat on Sunday when she had been carrying out her professional duties. She was handed over to the Shahbagh police station in the night and shown arrested under the Official Secrets Act. The court rejected an appeal to take her on remand and ordered her to be sent to jail.

The hearing of her bail petition took place on Thursday but the order was not passed. The date for the bail order was fixed for Sunday. Rozina is presently at the Kasimpur women's prison.