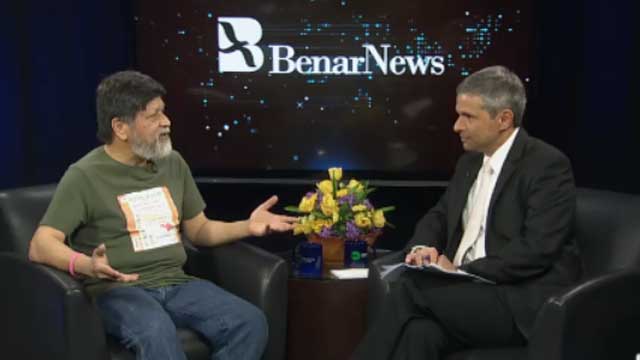 Police threatened Shahidul Alam with waterboarding the night they dragged him from his home in August 2018, then told him the next day all would be forgotten if he stopped criticizing the government, the noted Bangladeshi photojournalist who is free on bail said during interviews in Washington this week.

The ordeal shed light on what might happen to people who disappear in his home country and then reappear weeks or months later, unable or unwilling to say what happened to them, he said.

“It’s fairly simple: You get picked up, you get tortured, and then you’re made a deal. And, based on what happens before the deal, I suppose most people feel the deal is, you know, a good option,” Alam told BenarNews.

“That was what happened to me … I was made an offer the following day, and I was told in no uncertain terms that it was going to be repeated, and probably get worse, and my family might suffer as well, and that this was an easy way out,” Alam said during videotaped interviews given in Bengali and English.

On Friday, Bangladeshi authorities rejected his allegations as “untrue.”

Alam, who was in the United States to collect an award, said he intended to return to Bangladesh and keep speaking his mind freely, despite a fearful climate for journalists and intellectuals.

“Bangladesh is where I’m from, that’s [where] my work is … at the end of the day, my country is what it’s about. And come what may, that’s where I’ll be. It will be tough, but I don’t have a choice,” Alam said.

By Alam’s account, after he was taken from his home on Aug. 5, he was questioned “very aggressively” at a site he could not identify because he was blindfolded with his hands tied behind his back.

A weight was placed on his head, and someone threatened to “get those pins.”

His interrogators were trying to extract some kind of confession, Alam alleged.

“[B]ut as I was not agreeing, at one point someone said, ‘he is a very tough customer.’ After hitting me … I don’t know what they hit me with, as my eyes were blindfolded – I felt blood dripping from my mouth and nose. My clothes were getting wet with blood. Then I heard them saying, ‘it is not wise to hit in sensitive areas, because those are visible,’” he said.

“They were referring to waterboarding,” he alleged.

He was led somewhere and when his blindfold was removed he was standing “in front of a pond” with his hands bound behind his back. But the “water treatment” was not carried out.

The next day, at police headquarters, he was offered “a deal,” Alam said.

“Essentially that it would all be forgotten – no charges whatsoever, I would be taken back home, I could do what I wanted but I must not criticize the government,” he said.

But he refused the conditions, Alam said.

“Accepting the deal meant that I was going to be incarcerated intellectually. That’s a freedom that I’m not prepared to give up,” he told Benar.

Alam said he was taken from his Dhaka home on Aug. 5 because of comments he had made in YouTube postings and an interview with the Al Jazeera television network criticizing the government about a crackdown on a student protest movement underway at the time.

He was held without charge for 107 days and released on bail in November. But he still faces prosecution for allegedly spreading fake news online and defaming the government.

A spokesman for the Dhaka Metropolitan Police denied that Alam had been threatened with waterboarding or offered a deal while in custody.

“[W]e, the police in Bangladesh, do not follow waterboarding for interrogation. We do not have the facility for waterboarding. So, Shahidul Alam’s allegation that we threatened him with waterboarding was untrue,” police spokesman Masudur Rahman told BenarNews.

“He was not tortured at any stage of his captivity,” Rahman said, later adding, “His comment that we promised him release if he did not talk against the government was untrue.”

Alam first made the allegation about violence as he was dragged into court on Aug. 6, shouting to journalists, “I was beaten … [They] washed my blood-stained Punjabi and made me wear it again.”

“Claims that Mr. Alam had been tortured by police are untrue. At the order of the court, Mr. Alam was taken to the Bangabandhu Medical College Hospital where doctors found no injuries or indication of torture,” said a “fact sheet” on Alam’s arrest released by the government in late August 2018.

Alam’s arrest was not formally announced until Aug. 6. A judge later told his lawyers during a bail hearing that Alam was lucky he had not been abducted, the German news service Deutsche Welle reported at the time. -BenarNews