Khaleda Zia not to compromise with govt: BNP 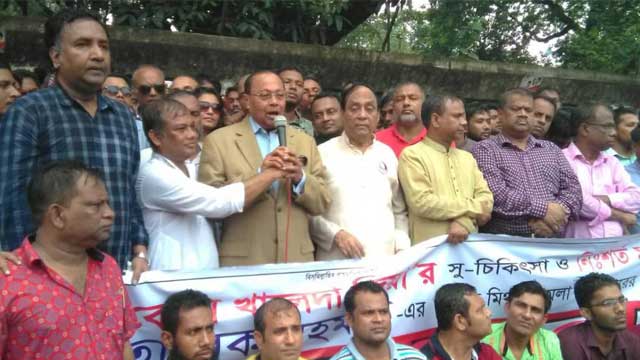 BNP senior leader Moudud Ahmed on Friday said their party chairperson Begum Khaleda Zia will not compromise with the government over her release from jail.

“Khaleda Zia won’t bow down to anybody as she’s the leader of the country’s 16-17 crore people. She would be released either though the legal process or a street movement, in no other way,” he said.

Speaking at a discussion, the BNP leader further said, “In fact, it’s not possible to free her without a spontaneous mass upsurge of people as she won’t reach any understanding with anybody. If necessary, she’ll endure more sufferings in jail, but she won’t make any compromise with the current regime.”

Moudud, a BNP standing committee member, said Khaleda was convicted in the cases that were not filed ‘lawfully’. “The cases were filed as per the political will of the government out of its political vengeance.”

As per the Code of Criminal Procedure, he said, the High Court can grant bail to a sick, female and elderly convicted person under any stage of the case proceedings, but a 74-year-old sick Khaleda Zia is not getting bail. “Even, condemned convicts and those who got life term imprisonment are granted bail. But, Khaleda Zia is not given it.”

The BNP leader said their chairperson is not getting bail as the government does not want it. “Courts are now regulated with political influence. Judges now can’t work freely applying their conscience as an appalling situation has been prevailing.”

About the current anti-graft drive, he said it has exposed that the government is bogged down in corruption. “Those arrested in the last two weeks belong to the ruling party.”

“But such a drive after 10 years is nothing but eyewash. I don’t find it’s any significance. Evan after that, I welcome it. I urge you (PM) to make public the wealth statements of your current and former ministers and MPs. If you do that, we’ll understand you’re serious about the drive,” Moudud said.

He also said the current drive will be successful if those abetted the small fry like Jubo League leaders Shamim, Khaled and Samrat in indulging misdeeds and corruption from behind the scene can be arrested. “We know you won’t do it, and the issue will be hushed up within a short time, and then newspapers will focus on other issues.”