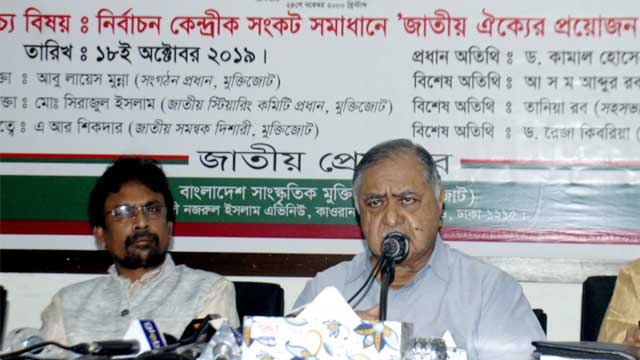 Jatiya Oikyafront Convener Dr Kamal Hossain on Friday laid emphasis on spreading the call for unity to every locality to free the country from ‘autocracy’ and establish 'effective' democracy.

“Those who want to continue autocratic rule, they create divisions among people and use the communalism for their parochial party interests. The autocratic rule can be removed if people remain united. We must spread the call for unity to all localities, districts and villages,” he said.

Dr Kamal further said, “We had got huge response to the call of unity and succeeded in the past. We’ll have to go to all localities and villages with the call for unity. We need to consolidate our unity so that people can play an effective role as the real owners of the country. That’s why we’re calling for the unity.”

He came up with the remarks while speaking at a discussion arranged by Muktijote, a political platform, at the Jatiya Press Club.

Dr Kamal also the president of Gonoforum, said democracy, the rule of law and constitutional rule will be restored while the nation’s desired goal can be achieved if people get back their ownership of the country and can play their due role.

“Let’s all the common people get united and gain the strength to become the real owners of the country. We’ll get effective democracy and we’ll be able to establish people’s governance at all levels, including district and local ones, if we only can get united,” he observed.

The Oikyafront chief said they are giving importance to the national unity to bring the country under the control of people. “As per the constitution, people are the owners of the country, not any temporary government. Even, a legal government is only the representative of the country’s owners. Those who grab power illegally, they are nothing, but the usurpers of power.”

He said the 'despotic regime' tries to cling to power by destroying power and weakening people in various ways. “They neither want to admit that people are the owners of the country nor want to empower them.”

Dr Kamal warned that no autocratic ruler could stay in power in the face of united resistance of people. “Though autocrats could remain in power for a temporary period, but they finally had to go. They never succeeded.”

Stating that the next election is very important, he said they will take steps for giving democracy an institutional shape and bringing dynamism into the economy for building a bright future of the country. “People are in favour of us, and this’s our big strength.”

Speaking at the programme, Jatiya Samajtantrik Dal (JSD-Rob) President ASM Abdur Rob said the current government does not allow people to hold meetings, rallies and express their opinions for ‘lack of’ the rule of law and democracy.

He said the country is now run as per the ‘whims of one person’ as the government has destroyed all the state institutions. “The country is now in a danger. Terrorism is going on in the name of development. It can’t continue for a long time.”

He said people want to get rid of ‘misrule’ and ‘vote robbery, through a qualitative change in the country’s political culture. “People must be made the owners of the country and the government must be accountable to people."

Describing BNP chairperson Khaleda Zia as the most popular leader in the country, he said the government has kept her in jail ‘unfairly’. “We demand her unconditional release.”