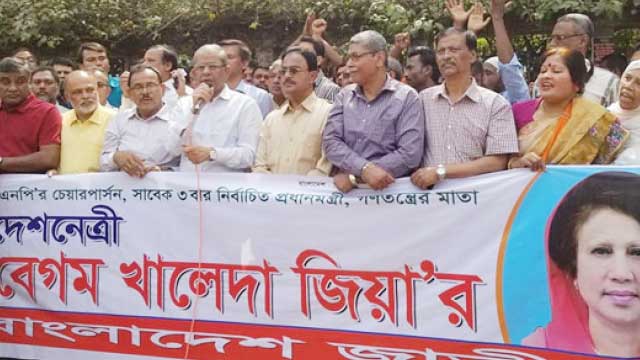 BNP secretary general Mirza Fakhrul Islam Alamgir on Sunday hoped that the High Court will deliver the ‘right’ order in the bail petition filed by their chairperson Khaleda by demonstrating the independence of the judiciary.

“We believe the judiciary will protect its independence by giving the true verdict as per the case merit as she (Khaleda) has been kept in jail unlawfully,” he said around two hours before the start of hearing on the BNP chief’s bail petition at a High Court bench.

Speaking at a human-chain programme, the BNP leader further said, “We believe in the highest court. As we believe in the Supreme Court and the High Court, we’re going there repeatedly. But it’s unfortunate the current fascist regime is regulating the court. So, people are not getting justice, and Khaleda Zia is also denied justice,”

Jatiyatabadi Sramik Dal, the labour wing of BNP, arranged the programme in front of the Jatiya Press Club demanding the release of BNP chairperson Khaleda Zia and protesting the soaring prices of daily essentials.

Fakhrul said Khaleda deserves bail in the cases she was convicted as per the country’s constitution. “The bail is her right, but she has been deprived of that right.”

He said though many political leaders like former BNP minister Nazmul Huda, ex-ruling party ministers Mofazzal Hossain Chowdhury Maya, Mohiuddin Khan Alamgir and Abdul Manan are out on bail even after being convicted in graft cases, Khaleda has not been granted bail in similar cases.

The BNP leader bemoaned that the government is going to celebrate the ‘Mujib Year’ amid festivity and spending huge money keeping Khaleda Zia in jail and implicating 35 lakhs people in ‘false’ cases.

He condemned the police attack on a procession of BNP, led by its senior joint secretary general Ruhul Kabir Rizvi, in the city’s Mirpur area on Saturday. “Taking out processions and holding rallies are our rights. We’ve established such country that we’re not allowed to hold rallies.”

Fakhrul alleged that workers and lower- and middle-income people are passing through serious sufferings due to the soaring prices of daily essentials. “The price of every essential, including rice, salt, onion and vegetables, has gone up, but the real income of workers is not increasing.

He voiced concern that garment factories are being shut while investment is declining. “The current government has failed on all fronts as it wants to hang onto power illegally controlling the state machinery.”

He called upon people to get united to come out of the current situation and restore democracy in the country.

“We must force this regime to hear people’s voice and realise the language of their eyes, free Khaleda Zia and establish a true democratic system through our united efforts,” the BNP leader said.

He said the government will have to quit and hold a credible election under a neutral government and the Election Commission to resolve the country’s ‘political crisis’.