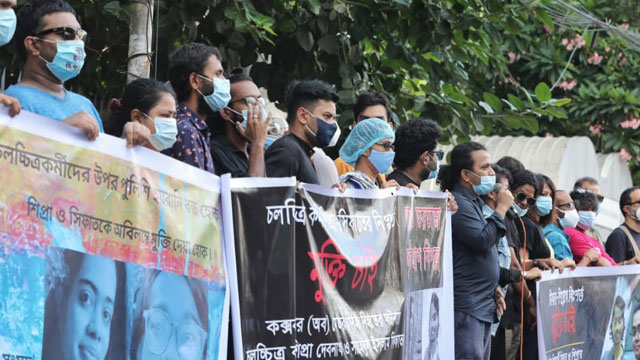 Students of the Department of Film and Media studies of Stamford University have protested the unlawful arrest of their classmates, who were arrested during the murder of the retired Bangladesh Army Major Rashed Sinha in Cox's Bazar.

They formed a human chain in front of the National Museum at Dhaka’s Shahbagh on Friday and demanded the unconditional release of freelance photographer Sahedul Islam Sifat and filmmaker Shipra Rani Debnath of the department.

The students deemed the arrest of their classmates “unlawful” and demanded immediate withdrawal of the charges. They also demanded that the arrestees are not mentally abused and their families harassed by the state agency.

They further demanded to ensure justice in the murder of Major Sinha by initiating a proper investigation.

Ganashanghati Andolan chief coordinator Zonayed Saki, from the human chain, said: “The government using state machinery to kill its citizens is not an isolated incident. Rather finding justice in such a scenario would be an ‘isolated incident.’ We must stand together.”

Film director Giasuddin Selim said: “Sifat and Shipra were screenwriters for one of my films, so I know them personally. Police have charged them in a false case after killing another individual. In our country, police can frame anyone with false charges.”

Major (retd) Sinha had been in Cox's Bazar with the students for making a documentary film.

Arrest warrants have been issued against nine policemen over the incident.